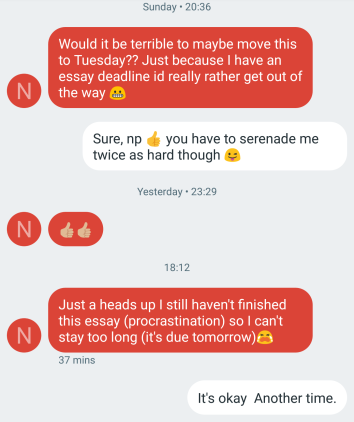 I was supposed to be meeting this girl, Nelli, on Monday but she rearranged. Did I do the right thing?

To begin with she gave a reasonably long message and it fits with her backstory as a student. I give her the benefit of the doubt and take her on her word, agreeing to the day change, but flip the script as well so it’s not just a straight agreement. (The serenading thing is callback humour to the set).

Then this evening she says she can’t stay for very long… I have two options:

I want to add to the above: I think this girl is into me and would like to meet. That’s the key factor playing on my mind. It went well on the street and we’ve stayed in contact even though I was away last week.

She’s now replied before I publish this post, so we can see how it continued:

I pushed and she came back quickly, with a lot of words and in particular the word “sorry”, which is good. She also is saying that she can still see me (if not for long) but she’s framing it as “we should spend more time together than just an hour”. I think that the chase frame is now in place, so I push again but reiterate that we can see each other another day under better conditions.

I think I did the correct thing here. I think the worst thing to do would be to agree to another day again, which tells her she can take up as much of my time as she likes. Alternatively I could go on the date itself but that suggests I would give up a whole evening just for an hour with her.

There’s a possibility that she’s verbalising her LMR before the fact, hoping that I’ll bounce her quickly to mine for sex (“I told him I couldn’t stay for long and then it just happened!”) but I doubt that’s the truth. I think the vibe when we met wasn’t strong enough for her to think that.

View all posts by ThomasCrownPUA

6 thoughts on “Was this the Right Thing To Do? (Texting Example)”