This lay report is a tad different because I’ve included the text screenshots. They were fun to be a part of and I don’t come across many “texters”; most of the girls I meet respond within a couple of hours for each message. That means there is a higher proportion of logistics relative to the entire conversation.

I don’t have out of this world text Game, and most of the gambits are taken from other, better, Daygamers. Remember this dictum: if you think you’ve seen it before, assume that you have. I don’t take credit for its originality.

Throughout I was hammering key frames: flip the script, secret society, and parody chode.

I was strolling through Covent Garden last Friday and boy, was it cold. Five layers adorned my torso and made me comically top-heavy; it was clear that my gym routine was: Monday – Chest, Tuesday – Chest, Wednesday – Arms, Thursday – Chest, Friday – Arms and Chest, Saturday – Chest and Arms, Sunday – Rest… / Chest.

As I went down King Street towards the Roundhouse Pub a whip of blonde hair caught my attention and in a split second I decided that it was my first set of the day. I hurried over and stopped her; she had a cute face and these hipster glasses which suited her well, maybe a low 7, and I really liked her waist length hair.

These days I try not to think of a tease when I’m approaching as it makes your words more genuine. So I just said what I saw, and trusted my mind to come up with something to go along with it.

“Excuse me, I just wanted to say that you looked very pretty. I noticed your outfit, it’s very different”. I gestured to the different colours she was wearing. I continued…

“You’ve got this big white coat, long blonde hair, and these terracotta trousers”. My mind was clutching at straws here. Nothing was coming to me…

“It’s very different…”, I repeated. Something had to give…

“It looks like your from a Hans Christian Andersen fairytale”. Okay that was something…

“And you’ve just stolen your lunch from Carluccio’s”.

That hit, and she loved to banter. It revealed her rebellious streak so it was easy to carry on down that rabbit hole.

“I didn’t steal it honestly!”, she smiled.

“Sure sure”, I prodded, “I can’t believe it. I’m here with this halo above my head and here you’re covering up your horns with your hair”. I took the opportunity to touch the ends of her hair; she didn’t mind.

“No no, I’m the good one!”, and she pretended to take the halo off of my head and put it on herself.

I brought my energy down and asked her about herself, finding out that she was half Ukrainian and half Swiss.

“That explains the hair”. I used that as an excuse to touch it again. “Where do you think I’m from?”. This is a fantastic question to ask a girl to: a) qualify her, b) get her to snowflake you, and c), ground the set.

She guessed Scotland and Ireland and eventually England.

She had to go and so I took her number.

“Astrid… okay there we are”, I said as I tapped her name into my phone. “Behave yourself”, I said with a wink as we parted ways. 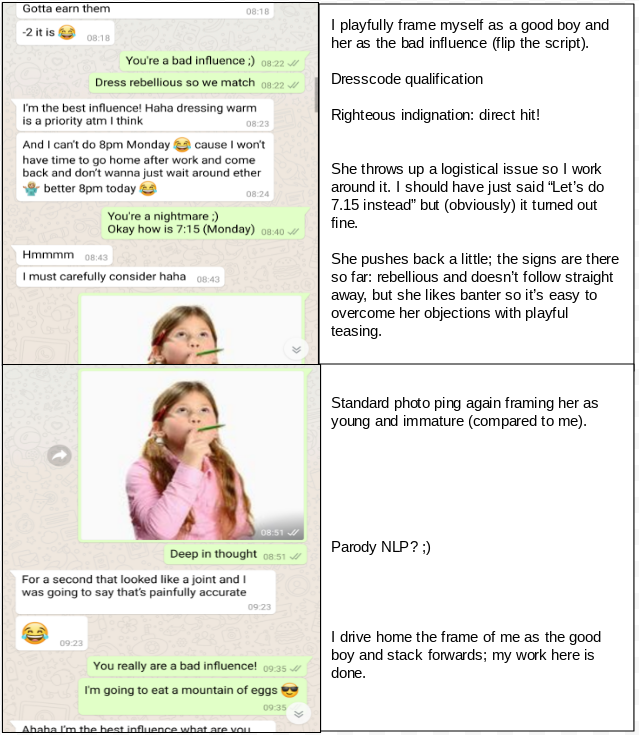 We met at the train station and again, it was damn cold. Astrid had turned up with her cute little glasses on again, but the same big white coat so I couldn’t see what was underneath. I immediately lead her down the street and into my first venue, a twenty-something’s pub. I sat her down on two stools and went to the bar to get drinks, where I bantered with the guy waiting there and gave the bargirl a cheeky knowing nod.

I returned with our drinks and sat them down; it turned out she was wearing ripped black jeans, with a t-shirt and a Mickey Mouse hoodie, complete with a choker. Not sexy feminine clothing, but it was congruent with her rebel image. Her exceedingly long blonde hair was pulled up in two pigtails either side of her head.

I started with my standard spike.

“Cheers”, we clinked our glasses, “although what do they say where you’re from?”

“Yeh I used to know a girl from Ukraine”. (Cheeky DHV). “Although in France they say if you don’t look each other in the eyes when you say cheers…”.

“Oh yes I think I’ve heard this…”, she smiled playfully.

“You’ll have seven years of bad sex”. We clinked our glasses again but with over the top levels of secret society eye contact.

For the next half an hour (she drank fast), we talked about where we were from and what kind of people we were attracted to. When I liked an answer she gave I’d throw out a compliment about her and then use the opportunity to move the physical escalation forward. Then I’d return to sitting back in my chair and saying few words, encouraging her to invest and talk about herself. All the time when I did this she would flick her hair away from her face with her hand: classic IOI.

We finished our drinks and I led her outside.

“How tall are you really?”, I asked. I had questioned her before on it and wasn’t sold. “Stand on this step so I can check”. It was pretty obvious what I was doing. The step took us eye to eye so I leaned in and pecked her on the mouth.

On to the next venue: a dark cocktail bar up the road, where she paid for the next round and we sat at the back. We sat side by side and at this point she actually took her shoes off and put her feet up on the sofa.

I turned the escalation up again as we played the Questions Game, and progressed the kissing to a full makeout. With that in the bag I eased off, knowing that I was going to pull the trigger that night.

“Let’s go”, I said again as we finished another round in thirty minutes.

“Where?”, she asked. I was going to go honest here. I thought that if she rejected the extraction I would still see her again.

“To my place for another drink”.

“Hmmmm”, she thought for a moment, “okay but I can only stay for like an hour”. She was neutralising her own ASD.

I lead Astrid back to mine and we settled indoors. I let her smoke the rest of her joint at the window while I used the toilet, then put on music and fetched some beers from the fridge.

When she had nearly finished I gestured to her with my hand.

“But I’m not finished yet”.

“You can finish it later”, I smiled.

She obediently put it out and swanned over, then I sat her down and kissed her again.

“Be gentle”, she said, as I got around to squeezing her tits.

“My nipples are pierced”.

Oooooh I’ve always wanted to fuck a girl with those, I thought.

I shrugged and carried on, pulling off her hoodie, her top and her bra to reveal some medium-rare boobies. I gently licked them and she drew a breath in.

I returned the favour to show off my beautiful ginger chest hair/forest and continued making out with her, before pulling down her jeans too. She pulled away at this point.

“I have to smoke the rest of my joint first”. I guess she wanted to make me wait a little bit.

I put on some seductive jazz and we sat at the window, her on my lap; she smoked while I idly played about with her wet pussy. The juxtaposition to the icy night air was delicious.

After she finished, we moved into the bedroom, where we made out heavier and she started sucking my dick vigorously. 10/10 for effort.

“Be gentle with me”. She reiterated.

I put on a condom and threw her around the bed, fucking her in different positions, making sure to be the least gentlest I could be, before she came and me soon after as well.

We both reclined while the jazz went on in the background.

“So when did you know that you would have sex with me?”, I began the PSI.

“Hmmm it was when you laid me down after we finished the joint”.

“When you kissed me the first time”.

We kissed a little more before I went back at it.

“How many guys have you fucked before?”, I asked.

“I don’t know…”. I was preparing myself for a big answer.

She counted on her fingers. “Five guys…”.

“One before I lost my virginity, and the other after”.

“Yeh, and scissoring”. She bit her lip.

I’ll be honest, once I saw her outfit I was scared I was going to be lesbian-blocked.

“You’ll never guess it”, she said.

“Ahh damn”, I said as I slapped my thigh. Hehehehe…

We fucked and smoked a little more, before I sent her off into the night so that I could get my beauty sleep.

View all posts by ThomasCrownPUA